Location on the Walking Tour
285 Queen Street, where the old Masonic Hall was located.
Audio Clip
Listen to Manos Tryfonopoulos describe how he helped a divided community become united again through putting on a children’s play.

In this section of the walking tour, we will speak about different organizational bodies within the Greek community over time. Most notably, these have been: AHEPA, the Daughters of Penelope, the Church Council, and the Philoptohos. While AHEPA and the Daughters of Penelope are no longer active in Kingston, many members of our community have recalled in their interviews the days when they were active. The Church Council and Philoptohos are still running today, and continue to serve as the organizational backbone of our community.

The location for this section is 285 Queen Street, because AHEPA (or the American Hellenic Educational and Philanthropic Association) and the Daughters of Penelope would hold their services at the Masonic Hall on Queen Street. While meetings for AHEPA were held in the homes of its members, grand services – such as when someone was becoming promoted to President of AHEPA, for example – were held at the Masonic Hall.

AHEPA stands for the American Hellenic Educational and Philanthropic Association. The Daughters of Penelope is its female auxiliary group.  It began in 1922.

Many of the earlier Greek families in Kingston were part of AHEPA and the Daughters of Penelope. Right up until we established our own church and community charter, AHEPA had been the dominant Hellenic organization for Greeks in Kingston. While not all Greek Kingstonians had been part of the organization, a significant number were. The membership within the groups eventually fizzled out, as our official community grew and the active leaders that had made AHEPA and the Daughters of Penelope so successful worked in our community council and Philoptohos instead. 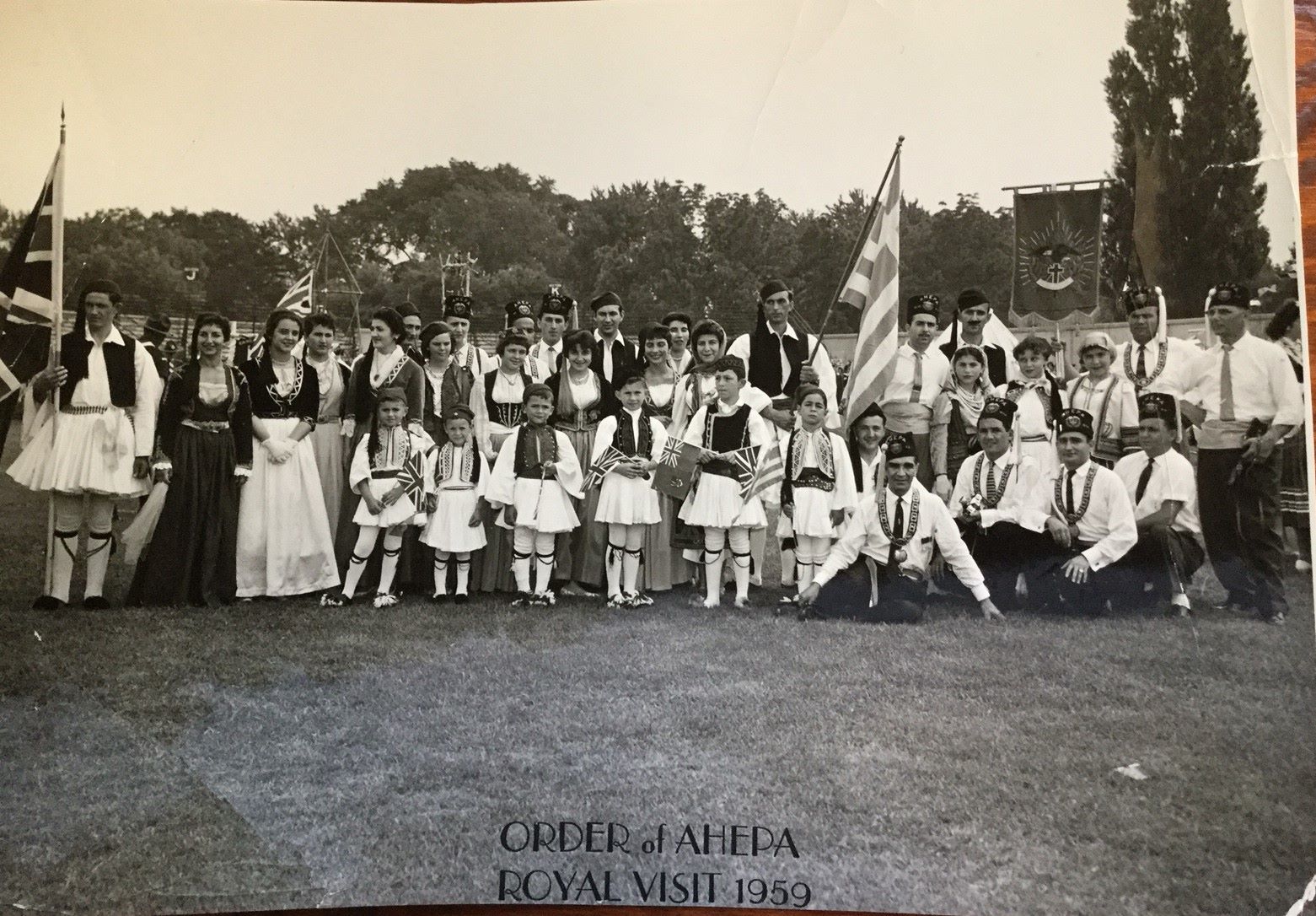 Murva Nikas, a very active member in our community, shared the photo below, which she refers to as the “movers and shakers”, because of what they were able to accomplish. The photo depicts a group of women in the early days of our community who worked hard to establish it and organize events such as Folklore. Many of the women pictured below had been a part of the Daughters of Penelope. 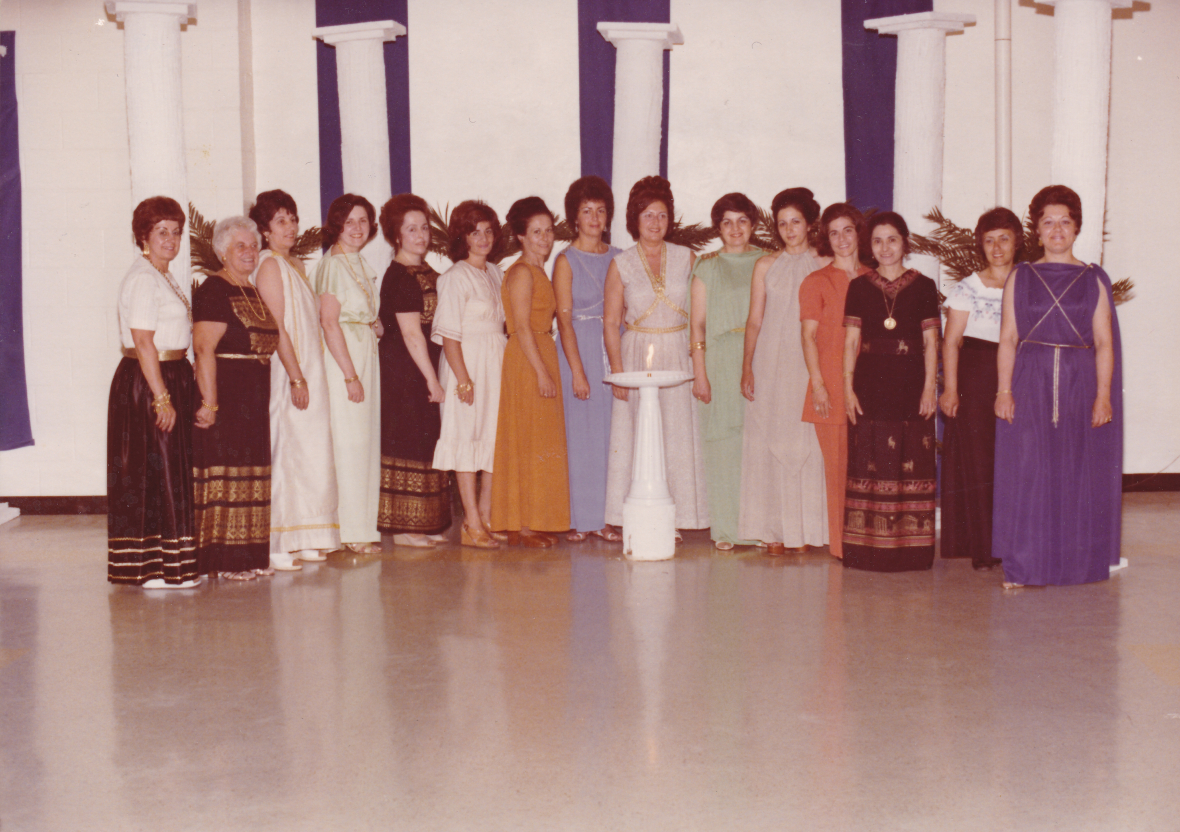 Both Spiro and Maureen Sakell had been members of these organizations, with Spiro being involved with AHEPA and Maureen being involved with the Daughters of Penelope. Spiro describes AHEPA as being all about philanthropy. “It’s a bunch of buddies getting together and asking when they can do to help others,” he says. Within AHEPA there was a strong sense of comradeship, and Spiro feels that once you’re an AHEPan, you’re always an AHEPan.

It was the first generation of Greeks in Kingston who started the AHEPA chapter here. Chris Zakos, Spiro’s uncle, was the President of AHEPA in Ontario, and then became the Vice President of AHEPA in Canada. Kingston also had the Daughters of Penelope, of course, which was the female off-shoot of AHEPA. Other AHEPA chapters often had the Sons of Pericles and the Maids of Athena (for younger members), but the Greek population in Kingston was not large enough to host those divisions.

Both AHEPA and the Daughters of Penelope would have their meetings in members’ homes, and their special services at the Masonic hall on Queen Street. These services were a special tradition wherein if someone was promoted to President, for example, there would be a service held with oaths. Maureen was once president of the Daughters of Penelope in Kingston; then she became district governor for Ontario. The duties of AHEPA and its off-shoots were to promote the Greek culture and heritage. It was philanthropic in nature. According to Sprio, these societies were based on the Masonic Lodge. The way they organized their ceremonies was the same.

When we established our official community charter and established our church, there was a period of time when AHEPA and the Greek community coexisted. Not everyone in the church would have been a part of AHEPA. You had to be an Orthodox Christian to be an AHEPan, but the church was a separate entity from the AHEPA system. Early generations of Greek immigrants began AHEPA because of the persecution they faced in the early 20th century. As Spiro says, the Greeks needed to “do something to keep themselves together”. Maureen feels that, as the Church grew, the need for AHEPA and its divisions decreased.

The chapter in Kingston was Maia Chapter 299. Every major city in the US and in Canada would have had a chapter. Members would often travel all over Canada, visiting the other chapters. AHEPA would have conventions every May 24th weekend.

Philoptohos directly translates to friends of the poor. It is a philanthropic organizational body within the church, comprised of women. As the Greek Community of Kingston’s website describes:

“Philoptochos also aids people who are poor in spirit, poor in health, poor in emotional stability, poor in companionship, and those poor in whatever is needed to lead a fulfilling life. Philoptochos is the right arm of the Orthodox Community and is always prepared to assist whatever and whenever needed.” (greekcommunityofkingston.com)

As Murva Nikas’s write-up in the 1992 Folklore Pamphlet states, the Philoptohos at that time had been working to build donations towards a cat-scan machine at Hotel Dieu Hospital and furnishing a room in the “new Kidd Wing” of the Kingston General Hospital. They were actively involved in donating to the Food Bank as well, and volunteered for many community activities together. Their dedication to not only the Greek Community but also to the broader Kingston community continues today.

The following photos are from various meetings of AHEPA and the Daughters of Penelope at the Masonic Hall on Queen’s Street.

The following newspaper clippings describe some of the events and accomplishments of the Daughters of Penelope. One article describes how Tessie Karis became runner-up for “Penelope of the Year” in 1966.

Manos Tryfonopoulos, a long-time and dedicated member of our community, described what our community had been like before receiving the charter, establishing a church, and hiring our own priest. Manos attended the church services hosted by the Ottawa priest when he first came to Kingston. As he put it, your hometown in Greece tended to determine which services you attended. The people from Tripoli, for example, attended the Watertown priest’s services, and the people from Corinth attended the Ottawa priest’s services. Since the person who sponsored for Manos to come to Canada had been from Corinth, it was natural that Manos should attend the Ottawa services.

The first church service he attended in Kingston was held in the upstairs part of St. George’s Cathedral. It was the evening of Good Friday. Manos heard the chanters and felt an urge to join them. He knew a bit about chanting from being heavily involved in the church back in Greece, and because his father had been a priest, and he thought he may be able to help out the small group of chanters in Kingston. His role of being a chanter, or a “psaltis”, is something that Manos has held as very important to him throughout his life. Manos never learned how to read notes, and so he sings only from memory. What he sings changes from day to day, he jokes. Once someone asked him if he sang from the European style of music notation or the Byzantine style, and instead he replied that he sings from the “Manos style”.

In Greece, Manos had been appointed by the Diocese to be the superintendent of an orphanage. Upon seeing that the Greeks were divided in Kingston, Manos began thinking of a way to get the two groups to “warm up to each other”. Through his experience working with children, he decided the perfect way to unite the community would be to “put on a play using kids from both sides”. Everybody had to come together for rehearsals of the play, and of course they had to get together for the final show. Manos changed the name of the group to be “the Greek Young People of Kingston”, so that it wouldn’t be connected to either of the sides. The play was Golfo.  Manos feels that this started to change things – that when the children were becoming friends, the sides became closer. Eventually, even before the church was bought, Manos feels there was a “solid community”.

It was in 1961 that a group of dedicated Greeks in Kingston – including George Speal, Chris Zakos, Frank Karis, Chris Nikas, and Louis Leos – approached the Bishop in Toronto about organizing themselves under their own community charter. That year, the Archbishop visited Kingston to help the Greeks establish their community. The first President of our church council had been George Speal. Manos was also voted onto the first church council that year, and had been involved in church council for many years, serving as President of the Greek community twice.

Toula Leos’s late husband, Louis Leos, was involved in the Greek Community in many capacities throughout the years, including being a church council member. Right up until his passing, Louis could be seen every Sunday selling and arranging the church candles (as in the photograph below), as well as circulating the basket for donations. He played Santa Claus every Christmas for the children’s Christmas Pageant, and is a well-loved and thoroughly missed member of our community.

Among the narrators interviewed for this project, Fil Menikefs, Manos Tryfonopoulos, Peter Fountas, and Paula Antonakos Boswell spoke about their involvement in church council. Fil Menikefs was a treasurer for two terms while his wife, Maria, was the chairperson for Folklore.

Peter Fountas was a president of the Greek Community. He had also been a chanter for 4-5 years, until the 1970’s. Peter remembers that the first priest the community used to pick Peter up for church every Sunday morning, as he was part of the choir. In the 1990’s, Peter got involved with church council, and he helped construct the second church hall, in the back of the church. As Peter describes, the community had some rough times with a lack of funds to finish the hall. They finally made it with the help of the community, and paid all the costs and bills and left the community debt-free. Peter is proud to be a member of the community.