Like many of Kingston’s early Jewish families, the Tevans were from the part of the Russian Empire that today is the independent republic of Belarus. Arriving in Kingston alone in 1900, Jacob Tevan stayed for a time with Karl Goldman, his wife’s brother. For various reasons, mainly because of the disruptions of WWI, Jacob was unable to send for his wife and second son Morris (the eldest, Joseph, was already in Kingston) until many years later, in 1921.

By that time, Morris was in his 20s and had brought over with him his fiancée, Sema Dutchkin. In the 1950s, they owned a ladies’ wear store at 257 Princess Street. Prior to this business, they operated a dry goods store at the corner of Barrie and York.

Morris was a Talmudic scholar and a musician, playing violin for the Kingston Symphony from 1951-53. He also wrote Yiddish plays, for which he composed his own music; these were performed at the Queen Street synagogue and at the LaSalle Hotel. The hotel was large, encompassing a “high rise” built about 1929 on Bagot Street and an old stone corner building (demolished in 1973) at Bagot and Princess.

(Note: The LaSalle was managed by Chuck Orenstein who, in the 1960s, became the first Jewish president of the Kingston Chamber of Commerce). 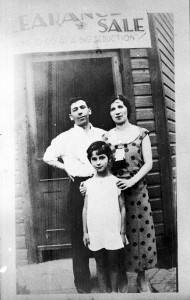