St. James’ Anglican Church, built of stone in 1844 and enlarged in 1888-89, was designed in the Gothic Revival style. This is an ideal location to discuss the life of Alfred Pierce, because his parents were married here and Alfie was baptized here. It is also almost across the street from the gym where he spent so much time, and a few doors from where he had a room in the old Jock Harty Arena. His parents, married 2 August 1871, were Albert Pierce, born in New York in 1846, Methodist, a widower at the time of his second marriage and working as a cook, and Margaret McCaghey, née Monaghan, born in 1841, a Roman Catholic and a widow at the time of marrying Albert. They both signed the marriage document with an X, indicating they were illiterate. Albert, a black man, was described in the 1873 assessment records as a tenant and a mariner by trade. Born on 24 May 1874, Alfred Pierce was christened at St. James’ Anglican Church on 9 August. Better known as “Alfie” to generations of students, he was said to “personify” the spirit of Queen’s. He attended Gordon Street Public School, which was located at the corner of Bader Street. (Gordon Street was renamed University Avenue in 1890.) He had a half-brother, David, from his mother’s first marriage.

It is hard to put together a true picture of Alfie’s life. He has become such a tragic but noble figure that it is hard to meld the commonly held beliefs with what official records show, and even they often contradict each other. One version goes like this: “Tragedy struck when he was 12 years old, as his father died, followed three months later by his mother. Alfie was left an orphan and entrusted in the care of a half-brother who was responsible for him for a short time.” But the 1891 Census shows both parents living with the two boys in Rideau ward (although their ages do not agree with what appeared on their marriage records, and Alfie’s age is given as 21, whereas he should be about 17). The city directories show that he lived with his mother on Grey’s Lane from 1894 to 1896, and from 1897 to 1903 on upper William Street. When Margaret died on 16 December 1903, Alfie would have been in his thirtieth year. On the same page as the article mentioning her death, the Daily British Whig carried a picture of the Kingston Limestone Rugby Team, Junior champions of Ontario. The picture was taken on 5 December, at the Toronto baseball grounds, and her son Alfie is standing in the back row beside the coach. Many members of Queen’s and Kingston sporting clubs were in attendance at her funeral. She was buried in Cataraqui Cemetery.

Even as a young boy, Alfie’s athletic talents were well known. Queen’s University Archives have a picture of the 1886 “Park Nine Baseball Club” with him as a 12-year-old in the front row. His association with Queen’s University is said to have started in approximately 1889 at the age of 15, when he was “recruited” by senior athletic student Guy Curtis. He became a waterboy and masseuse for the football team, and somewhat of a “mascot”. Subject to the racist attitudes of the day, Alfie became the “charm piece or object of amusement for the Queen’s University football team of white men”. According to some Alfie was the “public slave” of the team. But for many others, Alfie was a positive aspect of Queen’s athletics and certainly an integral part of Queen’s football. He was an essential part of the ritual that began each game, where he greeted the team on field and threw the football to the captain, who then led the warm-up while the cheerleaders led the crowd in cheering.

In the summer, Alfie was allowed to sleep under the stands of Richardson Stadium. At that time, the stadium was located where the Macintosh-Corry parking lot is today. During the winter, he lived in a converted change room in the old Jock Harty Arena. This was called the “boiler room” because it also housed the building’s coal furnace. (The 1939 Directory is the first to list Albert Pierce as caretaker and resident at the Jock Harty Arena. In 1948 and 1950 he is still listed as caretaker, but his residence is merely shown as on Arch Street.) In exchange for these accommodations Alfie kept the furnace stacked with coal, acted as a night watchman, and performed general maintenance. Later on he apparently received a $10 “allowance” for these duties from the Athletic Board of Control.

For a time Alfie was forced to share his role as mascot and his winter residence with Queen Boo-Hoo, a female black bear who had also become a team mascot. Within two years Queen Boo-Hoo was returned to a zoo because she became vicious. After this, there were four more bears that fulfilled the role of Boo-Hoo, acting as the Queen’s University mascot until the 1950s.

In 1948 Alfie suffered a stroke resulting in the paralysis of both his arms. After a second stroke three years later, he passed away in February 1951. For two hours his body lay in state on the ground floor of Queen’s gymnasium, surrounded by beautiful floral tributes. Hundreds of towns-people, students, educators and co-workers paid their last respects. The service was held at St. James Anglican Church, almost across Union Street from the gym and a few doors from Alfie’s room in the Jock Harty Arena. He was buried in the Church of England Cemetery at Cataraqui, with his headstone supplied by the graduates of Medicine, Class of 1934. During his lifetime Queen’s created the Alfred Pierce Award annually recognizing the best first year male and female athletes at the university. As well, the campus pub “The Underground” was renamed “Alfie’s” in his memory in 1981. 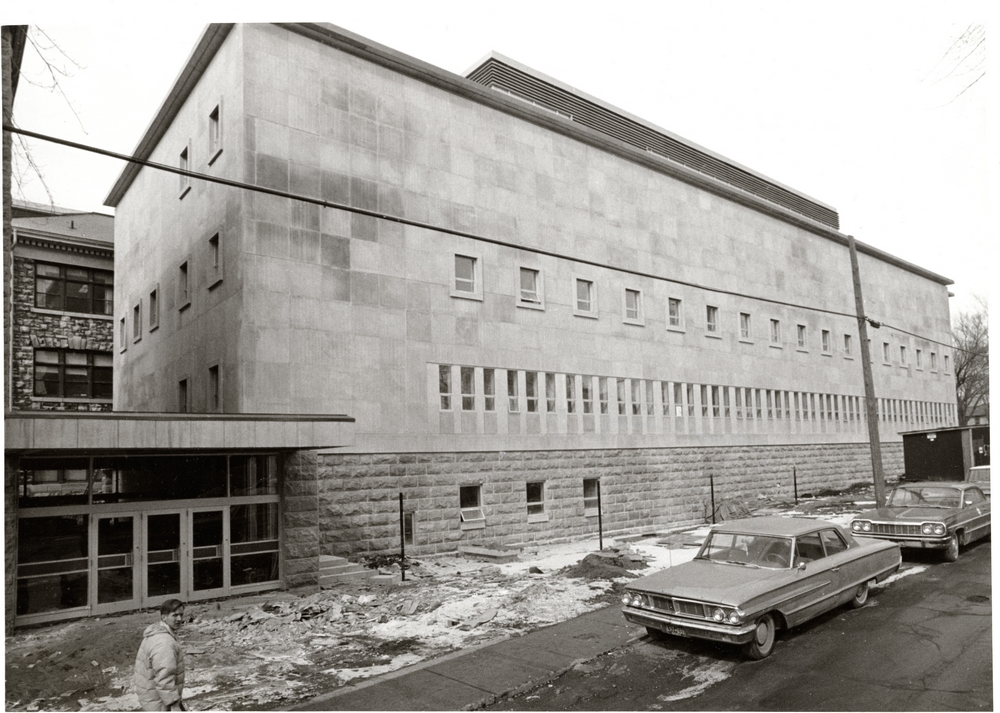